As part of a major refurbishment of their London Colney training centre and in preparation for the 2017-8 Premier League season, Arsenal FC has invested in a CryoAction integrated cryotherapy chamber for use by their players as key component of the team’s recovery and rehabilitation protocols. 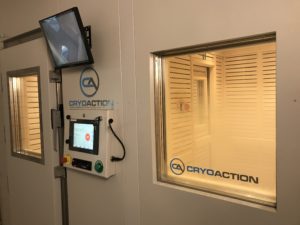 CryoAction co-founder, Ian Saunders commented ”We were delighted to have been selected from a number of companies offering differing solutions by such a prestigious club as Arsenal FC. The club has moved forward from using an interim mobile cryotherapy solution to a fully integrated chamber which emphasises the growing importance of whole body cryotherapy as a recovery modality for Premier League teams.”

The installation was completed in the pre-season with players making full use of their new cryotherapy chamber as part of their preparation for the new Premier League season. Accommodating up to 8 players in a single session, the new unit offers treatments at temperatures as low as -160°C for durations of between 3 and 5 minutes.

They said “Mesut you have to be ice-cold in front of goal”. Ok, I’ll try my best … ❄????⚽ #coldchamber #preseason #regeneration 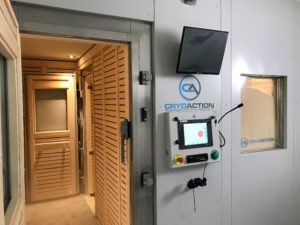 ‘The installation at Arsenal went very smoothly and working in collaboration with our partners BOC & Thames Cryogenics, we have created one of the largest cryotherapy chambers installed in the UK.” said David Morris, CryoAction co-founder. He added,” We look forward to working with the medical and sports science teams at Arsenal FC to introduce a best practice regimen around whole body cryotherapy as a key element in their recovery protocols”.