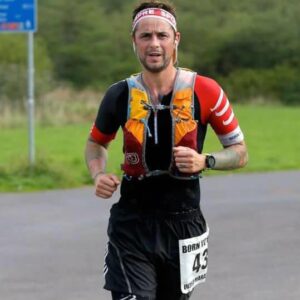 An ex-soldier turned amateur runner has completed 80 marathons in just seven years, having started racing as a hobby and way to unwind after leaving the armed forces.

Gary Howells, 39, from South Wales, finished his first marathon in 2013, and now runs a fitness centre in Llanelli, coaching others on their running training and techniques after completing 80 marathons, 30 ultra marathons and six Ironman triathlons across the globe.

The experienced runner has credited active recovery with enabling him to achieve the incredible milestone and complete thousands of miles on foot. Gary first used cryotherapy in Poland in 2016, in preparation for the Marathon des Sables, a six-day, 251 km (156 mile) ultramarathon – the distance of six regular marathons.

He has continued to use an advanced type of super-cold therapy from CryoAction at SwanseaCryo, to help assist his recovery from intense exercise, allowing him to train and compete on a regular basis.

The sports therapist has a broad knowledge and experience of working in a range of clinics and now focuses on helping other triathletes and runners improve their technique and recovery. He is a running movement specialist with a wealth of knowledge in movement patterns and biomechanics, enabling him to diagnose injuries and identify improvements to body movement.

Gary has supported events such as Ironman Wales, Great Welsh Marathon, Front Runner events and many local triathlons and running events, recommending super-cold therapy from CryoAction to improve their finishing times and training regimes. CryoAction cryotherapy chambers are the same professional, clinical quality chambers as those used by the Premier League Football teams and the England and Wales Rugby Federations.

Talking about his achievement, Gary said: “Sometimes I have to pinch myself, and take a moment to count all the events I’ve now completed. I only started running seven years ago and I must have covered tens of thousands of miles on foot, bike and in the water.

“When people ask what my secret is, my first response is recovery – I don’t just mean having a day off or working on strength training rather than hard miles. I mean active recovery. I used cryotherapy for the first time four years ago and haven’t looked back. Since returning home I found a CryoAction chamber on my doorstep and immediately booked a block of sessions. After a three minute session at -130 degrees I feel like I can do another marathon straight away. It’s hard to explain but you can feel your body repairing and the blood flowing.

“There’s many other forms of active recovery, including stretching, sports massage and yoga, but cryotherapy is the quickest and most effective, and has allowed me to keep running long distances all over the world. I have tried 100% oxygen and have still not have the same affect or benefits of the extreme cold therapy on my body. 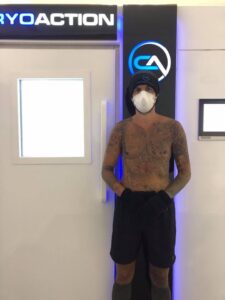 “I’ve never had an injury, and I aim to pass my techniques and what I have learned to others to help them improve their times. However, without proper preparation and recovery, they may not even make the start line. Recovery is a massive part of preparing for a race, as is nutrition and sleep – if you’re not recovering you’re not progressing.

“Often runners and triathletes invest in expensive equipment, to shave seconds and minutes off their times, however those that are willing to spend thousands of pounds on a bike, helmet, shoes and kit overlook recovery. A session in a cryotherapy chamber or a sports massage is a fraction of the price of some sports equipment yet it doesn’t occur to many to invest in their body and recovery as it is not as material as a shiny new bicycle.”

SwanseaCryo operates CryoAction’s professional, clinical and quality chambers, which involve exposing the body to temperatures of -130 degrees for three and a half minute sessions. The advanced, whole-body cryotherapy treatment means that Gary and anyone that uses the chamber is able to recover faster and race more often.

CryoAction chambers provide a superior quality of ultra-cold treatment which reduces pain and inflammation from sports injuries by dulling the nerves and restricting blood flow to certain parts of the body.

Ian Saunders, CEO, of CryoAction, said: “Gary’s story is an incredible and inspiring one – to achieve such an achievement in a short period of time is staggering. We’re thrilled that he credits what he has achieved to using our facilities, and it goes to show that cryotherapy and extreme-cold treatment isn’t just for highly paid sportspeople, it’s for everyday fitness enthusiast too – the ‘everyday elite’. We have seen a rise in the amount of people using the therapy to improve their running and triathlon times and it’s great to see people investing in their health in this kind of way.

“Our aim now is to increase the number of CryoAction chambers available for public use across the UK, so we can provide even greater amounts of recovery and respite to those that need it.”

You can see the full CryoAction range here