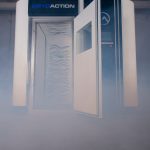 “Foxes never quit!” This has been the cry of Leicester City, last season’s Premier League champions. Epitomising the never say die spirit of the club is its best-known Number 9, Jamie Vardy. Almost a decade ago, he was combining his day job at a medical supplies factory with his nascent football career. His first club was Stocksbridge Park Steels, near Sheffield, who play in the Evo-Stik First Division South, Step 4 in non-league football’s National League System.

If you read his autobiography entitled From Nowhere, he also states that cryotherapy has helped him to move up the leagues. He said in The Guardian (22 November 2015) that:

“I was very close to not playing but the physios have been brilliant. I don’t think even some of the brainiest men in the world would understand the name of stuff they’ve been doing but they’ve been working constantly on me all week.”

Jamie Vardy has benefited from Leicester City’s acquisition of “The Torture Chamber”. When the article was written, he equalled the Premier League record of scoring in ten consecutive games held by Ruud van Nistelrooy. Shortly after, that record was broken. As well as helping Jamie Vardy, did cryotherapy play a part in the Foxes’ Premier League title win in the 2015 – 16 season?

Thanks to cryotherapy, the Foxes also had the quietest physiotherapy room in the Premier League. The 2015 – 16 season saw Leicester City players making fewer visits for treatment. Furthermore, the club’s cryotherapy techniques also include dietary intervention. Players also made changes to their diet thanks to detailed analysis on their iPads. The BBC’s article on Jamie Vardy and his fellow teammates is worth a look.

Jamie Vardy’s book From Nowhere: My Story, is available from most good bookshops and online via Amazon.co.uk.