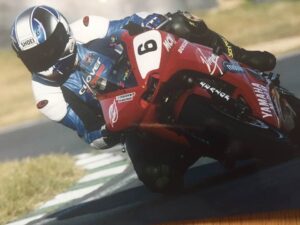 An ex-British Superbike racer is using new state-of-the-art recovery treatment to manage his multiple sclerosis (MS), leaving him pain-free and able to enjoy life after racing.

Alister Bailey, 37, from Poole in Dorset has credited a super-cold therapy, from CryoAction, to help easily manage his MS, allowing him to work again following his retirement from motorcycle racing.

CryoLabs use the same CryoAction professional, clinical quality chambers as those used by the Premier League Football teams and the England and Wales Rugby Federations.

Alister, who previously raced for Virgin Yamaha in the British Superbike Championships for more than seven years, was diagnosed with MS after his racing career retirement. He was left bedridden, temporarily blind and unable to move 10 years ago when the MS first developed.

Since his MS diagnosis, Alister has struggled with mobility, fatigue and even cognitive function as the lifelong condition affects his brain and spinal cord function. However, after searching the internet for solutions to ease his pain, Alister found an advanced treatment available on his doorstep, which is used by professional athletes to improve performance and aid recovery.

CryoLabs, in Dorset, operates CryoAction’s professional, clinical and quality chambers, which involve exposing the body to temperatures of -135 degrees for three and a half minute sessions. The advanced, whole-body, cryotherapy treatment means that Alister is able to keep mobile, has gained better clarity of thought, and can carry on his day as normal.

After hanging up his helmet at 23 years old, Alister now works for a construction company, and is able to work without hindrance. He is often ache and pain-free following the cryotherapy treatment, which otherwise leaves him fatigued and unable to sleep.

Alister says the advanced treatment has changed his life, helping to turn a bad MS day into a good one.

Alister said: “Since discovering CryoLabs’s cryotherapy treatment, eight months ago, my life has genuinely changed. I have gained control of my condition for the first time, and can lift my mood and mobility by having a short session of treatment. I try to use the chamber every day and anticipate my afternoon fatigue by having the treatment around mid-morning.”

CryoAction chambers provide a superior quality of ultra-cold treatment which reduces pain and inflammation by dulling the nerves and restricting blood flow to certain parts of the body.

The six metre whole body cryotherapy unit has a dual chamber design, which allows the main chamber to retain its extreme level of cold efficiently. The hi-tech, fully computerised, two-stage cryotherapy chamber is located at CryoLabs, Poole, Dorset, with other facilities planned to open in Glasgow and Greater London in 2020.

Ian Saunders, CEO, of CryoAction, said: “It’s great to see our cutting-edge technology being used beyond state-of-the-art sports training facilities to improve the lives of everyday people. Our aim now is to increase the number of CryoAction chambers available for public use across the UK, so we can provide even greater amounts of recovery and respite to those in need, regardless of their age or condition.”