Cryotherapy is a form of therapy that uses a low temperature. It is mostly used to treat lesions by reducing muscle pain caused by tissue damage or swelling. Conventional ways of application of cryotherapy are by ice packs or ice tabs but can also be done using complex procedures like the Hilotherm and Cryotherapy Chambers. 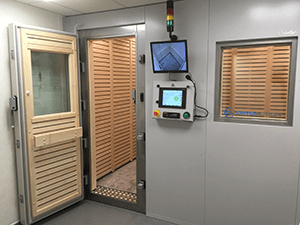 This is a chamber for the therapy which is built to fit into a building. This model is good for in-house patients due to restriction in movement. By making it fit in a fixed space, it helps in integrating its use with the daily routine of the user. The internal walls of this chamber are made using wood pallets while the outside walls are done using thermal insulators to control temperatures. The size of this chamber is determined to base on the number of people who can use it a go and can either be leased or bought.

It is a portable chamber that can be installed or detached when needed. The main reason for such an arrangement is the size of the chambers or the frequency it is needed. It is much bigger than the fixed cryotherapy chambers as it needs enough space to accommodate a changing room and a set-up area. The materials for the inner and outer wall are similar to the fixed chambers, with an exception of the outside mounting of the liquid nitrogen tanker. It is an ideal therapy chamber for outdoor sporting activities in a fixed location.

It can be compared to the transportable cryotherapy chambers, just that it is customised for the rental market. It is relatively smaller and can be easily availed when and where needed. The lease can be a long-term or short-term basis considering the need and time. The technology and components used are the same on the three chambers. This chamber fits well with the periodic sports camps that need the service for a specific period of time.

Choice of a Cryotherapy Chamber

The choice for the chamber to use is reliant on the availability of resources, time needed and the target group. Resources will determine if it will be bought or rented; duration will determine whether it will be transported or leased while the target group will shade light on whether it is for commercial or domestic use. A significant percentage of people who use these chambers are sports personalities due to the magnitude of the activities. They need urgent medical attention in such a situation. In such a scenario, the best alternative is the transportable cryotherapy chamber. Despite its ability to move about when the team needs it, its amenities and space are much bigger. Also, the marginal cost of running a transportable chamber is much lower compared to a rental chamber.